While many churches freely worship and celebrate Jesus around the world, many others are forced to gather in the shadows. This is the plight of Christians in Russia as the government grows more and more oppressive.

Last year, the Russian government passed a series of laws that made evangelism outside of an approved church illegal. A small group meeting in a home is now illegal. Sharing your faith with a friend is illegal. Even sending an email with a mention Jesus is now illegal.

At best, you will be fined. At worst, you’ll be arrested and sent to prison.

As spiritual darkness falls over Russia, the window for sharing the message of Jesus is quickly closing.

The government has already begun shutting down religious groups that have not been officially approved, going to the extent of taking over their buildings.

Valeria, one of our missionaries in Russia, senses that it is only a matter of time before they go after Christians even more aggressively.

She told us, “We do not know how many years it will be possible to preach in Russia and how long we as a church will be able to freely assemble. With each passing day, the laws change and become more rigid.”

We at Guidelines have also felt the forces of darkness pushing against us. Far East Broadcasting Company (FEBC), our broadcast partner that has aired Guidelines devotionals on radio for decades, has had most of their FM broadcast licenses revoked by the Russian government.

But the church in Russia has not lost hope.  Nor do they cower in fear.

They are strong and courageous, and so we will be too. Despite the restriction on our radio broadcasting, we’ve found other ways to shine the light of Jesus into the darkness.

With our broadcast partner, we’re streaming our devotionals online. And it’s working! 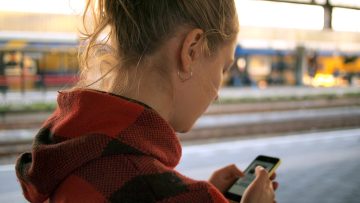 Here’s a response that we received recently from a woman named Marina in St. Petersburg, Russia:

“I just began listening to your broadcasts on the internet. Honestly, I like your programs even though I do not understand everything. My question is: how does faith in God begin? How does one develop faith in God? I will continue to listen to Guidelines because I need to learn many things for my life, because I want to receive salvation.”

These are dark times, but the light of Jesus continues to burn brightly in the hearts of His followers, despite persecution. Our missionaries in Russia are working vigorously on behalf of the local churches. We are sharing the message of Jesus in any way possible.

We’re committed to fighting back against the spiritual forces of darkness in Russia. Will you join us?

Give to Continue Sharing the Message of Jesus